YARD 0.4.0 (codenamed The Whole Nine) was just released today. It’s by far the biggest release since I started writing YARD in 2007. For those who don’t know, YARD is a Ruby documentation tool that surpasses the features of RDoc to bring much richer docs and extensibility to documenteurs. There’s plenty of new features to discuss and plenty of new toys to show off (new templates, live doc server with user comments, new APIs, plugin support), so let’s get started.

The old templates were ugly. This time, full attention was put into making the templates both aesthetically pleasing and more informative than the old ones. The unusable, unlinkable frames were removed in favour of a Javascript based menu system with inline search for methods, classes and modules. The look is much cleaner (partly inspired by Apple’s Objective-C and Sproutcore documentation) and much easier to follow. And many more meta-data tags are now properly included in the docs. 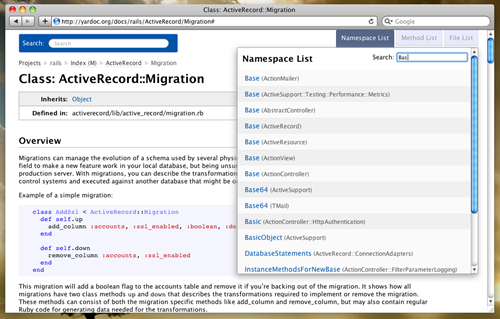 The new templates in action, showing docs for ActiveRecord and the list of classes/modules on the top right.

This template re-design is in part due to the new templating engine introduced in YARD 0.4.0, which allows for much more user customization. This will be important as people start extending YARD to add other meta-data tags or write plugins (also new in YARD). My next blog post will be discussing how to write a plugin that customizes the templates to add extra output without having to redesign everything. Stay tuned for that.

YARD’s homepage was redesigned and moved to http://www.yardoc.org. I think the new look is much nicer, but the real kicker here is the new Live Documentation Server, powered by YARD to generated docs on the fly.

This isn’t exactly a feature of YARD itself, but a testament to what can be done with YARD. I mentioned the new templating engine gave a much better ability to customize templates than before. The engine is partly what makes the live documentation server on YARD’s homepage possible in order to integrate it with the Sinatra app that powers on-the-fly template generation as well as on-the-fly search.

The live docs also allow for direct links to documentation pages for individual methods (like YARD::Templates::Engine.render) so linking users to specific methods is now much easier. The best feature of all, however, is the brand-spanking-new user comments system powered by DISQUS that is available on these individual method pages, allowing users to contribute extra information about methods in one place. User feedback tends to be key in large projects. This feature is going to change documentation. If there is one thing PHP’s community has over Ruby’s is a pretty great documentation site. Well, now PHP can goto hell; because PHP finally has a goto statement, and Ruby finally has a great documentation site. 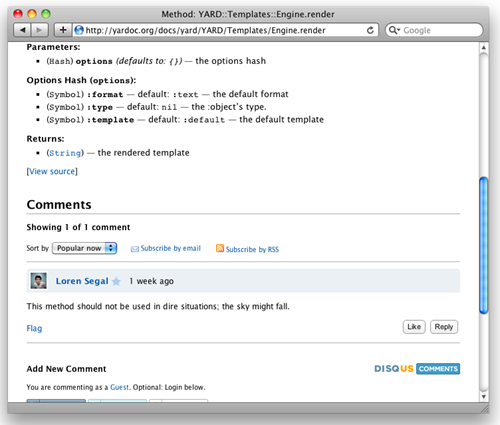 If you didn’t find it on the homepage, the docs server is here: http://yardoc.org/docs.

Note that It’s mostly just an alpha-experimental test to see how YARD holds up. Things should break in the first few days; when they do, let me know and they’ll get fixed. If everything works out, we will be merging the service back into the beloved http://rdoc.info.

You can read more about all the new features in the what’s new document in YARD’s docs.

So that’s the new release of YARD. Try it out (gem install yard) and start documenting your code. And remember, if you like YARD and use it often, consider donating to make it even better. YARD accepts Pledgie donations: